How I Broke A Bad Habit 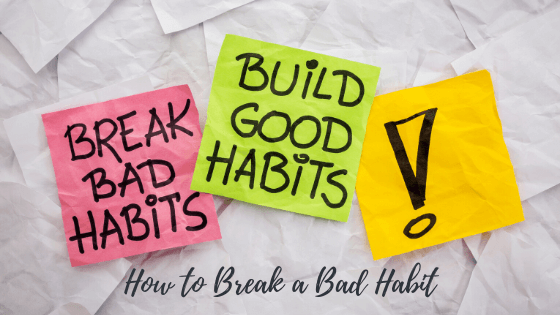 A little while ago I realized I was getting into a pretty deep rut that was going to turn into a bad habit if I didn’t do something about it.

It was during the beginning of the Covid-19 situation, and I found that I was watching more TV than I should when I knew that I had plenty of things to do that would be much more productive.

Honestly, I was surprised at how fast it happened.

I think a LOT of us were sliding into not-so-productive behaviours back at the end of March. I’m just grateful I realized it before it got out of hand!

Fact: Getting out of that rut was a LOT harder than I expected it to be, and I knew I had to get strategic and tactical about it.

Everything that was going on in my life at that point supported staying in the rut and doubling down … I’m talking about stress, longer than normal to-do lists, seeing others being really productive with tidier than normal houses, you name it!

Here’s what I did to kick it:

I KNEW I had to make a radical change to remove the temptation.

For me, that meant shaking up my routine by getting really BUSY with something else, so there was no time or energy to get seduced back into my rut.

That meant I sat down and planned out how I could help more people in a bigger way in this weird time – planned new sessions for classes – and finally signing up for new courses that will ultimately help me help you even more.

And do you know what? Once I got started, it wasn’t that bad at all. It was actually fun.

Plus, I had something to show for it: a new Online OnDemand platform that had been 2years in the thinking – but actually only 3weeks in the making.

In the book Atomic Habits, James Clear writes that one of the best ways to break a habit is to reduce exposure to temptations – removing anything that prompts you to do it.

Then, once those cues are gone, you can reframe your mindset by looking at the benefits of NOT doing the action. For me, that meant substituting other things that gave me tangible results!

Just some food for thought, especially if you have picked up a habit or two over the past few months that you’d like to kick (or move out of the way so that you can start to move your body more)

Make today the day you help your body last a lifetime.